GEOLOGY OF THE KNOBSTONE HIKING TRAIL: WHAT’S AN ESCARPMENT? 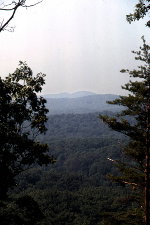 400-200 millions of years ago. Today’s scenic vistas were created when a ridge of rock strata, now known as the Martinsville Hills—Knobstone Escarpment emerged. An escarpment is a big ridge of hills rising abruptly from a plain. The Martinsville Hills-Knobstone Escarpment is “associated with” the Cincinnati Arch formation to the west, and erosion of the surface limestone to the east. This left the ancient sea bed below, now named the Scottsburg Lowlands in the eastern section of Southern Indiana (photo left). The KHT ridge’s underlying Borden sandstone bedrock extends from Louisville north to within 30 miles of Indianapolis, ending at Martinsville. The east face of the ridge is characterized by high knobs and bluffs on the Norman Uplands, with a gentle slope westward towards Illinois (photo right). 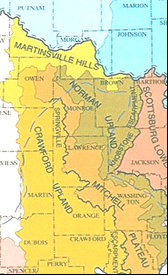 What’s an escarpment? What is remarkable about the photos at left and right is that they were taken on the same date, October 21, 1995, from the exact same place. The place was Round Knob, Mile 6 on the KHT, and they capture the views to the east and west from the knobstone escarpment. Factors that go into creating the striking difference between the two include, but do not entirely explain, differences in elevation, soil, rainfall/water availability, and aspect (orientation to the sun).

The Indiana state physiographic map (left) shows the extent of the Scottsburg Lowland and Norman Upland features and the counties the escarpment passes through, from Morgan to Floyd. FYI: the blue was once the Silurian Sea but is now just flat corn country.